At an altitude of 850 meters above my village of Kavousi in Lasithiou, nature gives its sweetest fruit. Wild plums, also known as forest plums! Wild plums grow everywhere in nature; on the slopes and in the gardens of old houses on the mountain of Thripti and in old rural settlements. 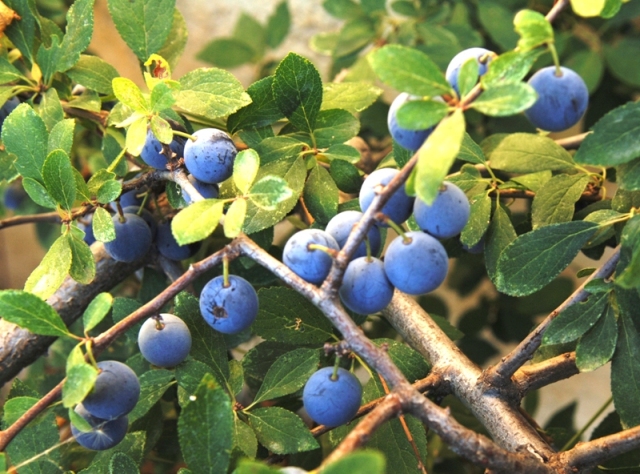 We go every year on the day of the great celebration of the Cross and Saint Nikita to honor the custom and to commemorate the life of twenty-five year old Kostas Saridakis, who was the brother of my dear colleague Leonidas Koudoumogiannakis’ grandma, Maria Koudoumia. Saridakis lost his life in 1941 in the mountains of Albania during the Second World War. He was in love with a girl from the village, but she set a condition for him to marry her and that was to build a house in Chamandi. All the workmen of the village were called upon and the construction of the house started on the 1st September 1940. By the 14th, on the celebration of the Holy Cross, the house had been completed and so a house-warming party had been organized in the garden of the house. However, at midnight Kostas received an urgent message for his immediate recruitment to the army. Mussolini had planned the invasion of Greece. He left the celebration to enlist and never came back.
We gather in the yard with many friends. After coffee, we drink raki. The table is full of snacks and the glasses of raki. A handful of wild plums are stacked up in the middle of the table. “Oh, good old sweet plums; they match perfectly with the raki!"
Round and dark black, slightly crunchy but fleshy with a sour taste and a rich aroma that makes you pause to enjoy.
They are the fruit of the mountain and forest, pure, totally organic, uninfected, watered with snow and rain, with great nutritional value, a gift of nature to man.
The ravines and terraces were once full of fragrant fruits of local varieties. Plums, black figs, cucumbers, peaches, raspberries, quinces, walnuts, bilberries, prickly pears, citrus, orange peel, lemongrass, nectarines; what to do? Sadly, today we are looking for varieties from Africa and Asia for alternative crops, and we have left the traditional Cretan cultivation of our ancestors.
Leonidas found two kilos of wild plums to try to make jam, with the help of his young son John. He liked the idea as he was crazy about jams. Once he had made it he called me. I asked him to keep a jar for me for when I went to the village. I was enthusiastic about the idea. "I want to present it on my page!" He promised to show me rare wild fruits of the mountain and forest, which are enjoyed by the birds but also by those who are looking for the hidden treasures of nature.
Thank you, Leonidas for everything. You are always by my side; guardian, mentor, partner. All the information, the photos, the details of this rare fruit and the recipe are from Leonidas Koudoumogiannakis.

Method:
Wild plums are small in size and have a hard stone inside which needs to be removed. I have seen some housewives boil them and then mash them with a fork and patiently remove the stones. We did something very simple and inventive. We washed the plums well. Take a plastic straw - which we all have in our kitchen - pierce the plum with the straw on one side and, pressing lightly, the stone exits from the other side. It took my son and I no time at all to remove the stones.
Then take the plums and place them in a deep saucepan preferably. Add the sugar and mix gently. Cover the pot with cling film and refrigerate for about 24 hours. During this time, the fruits release their juices and mix with the sugar.
The next day, place the pot on the oven ring at a low temperature to avoid sticking. Add some water. I added half a glass because there was already enough juice. Scrape the surface of foam formed by taking it off with a small teaspoon. Stir frequently with a wooden spoon to prevent the plum from sticking to the bottom of the pot.
Shortly before the end, add the ambrosia and lemon juice, which works both as an antiseptic and preservative but does not sweeten it more. As soon as the jam binds - apply the aforementioned method to check – withdraw it from the heat and fill the sterile jars.
For a more fluid jam we can grind the pulp in a blender. Personally, I quite like the peel which has a distinctive bitter taste.
To tell you the truth, I kept only a little for us as the rest I wanted to distribute to friends! 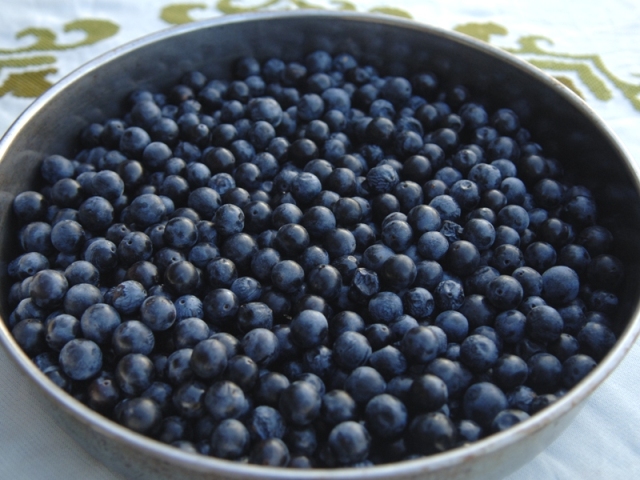 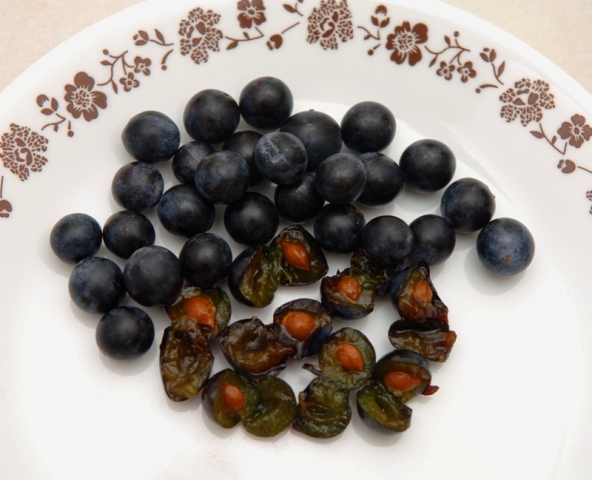 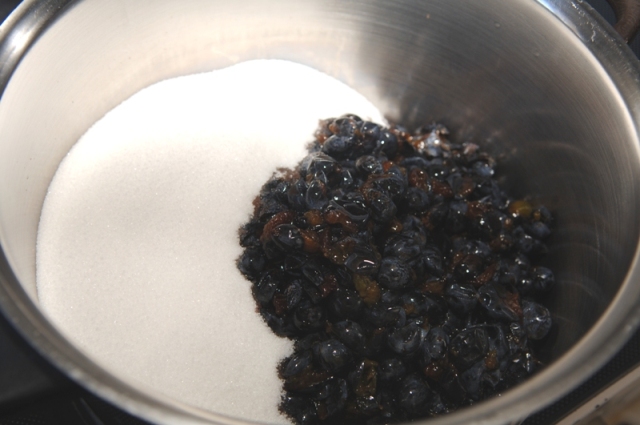 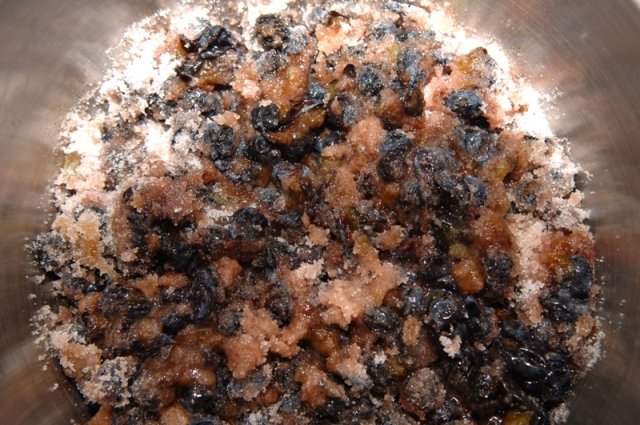 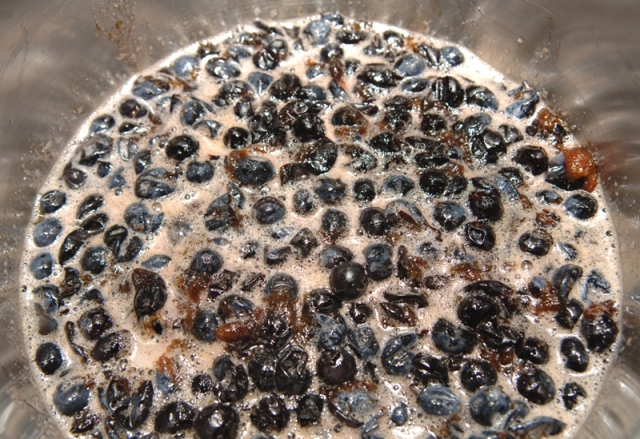 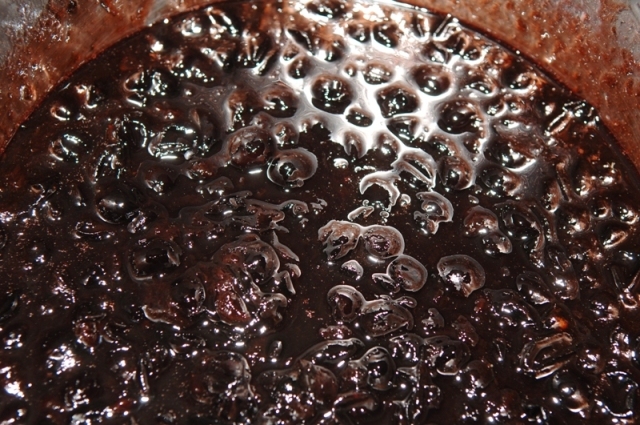 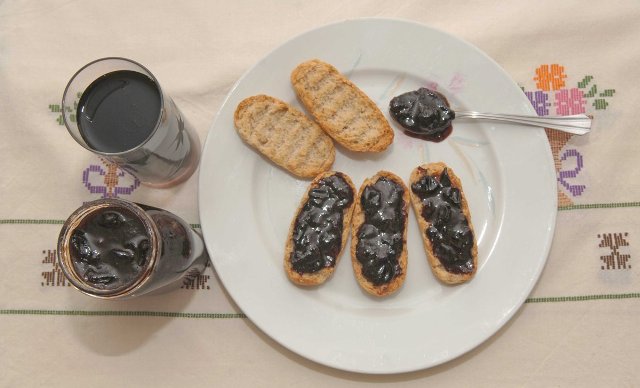