This is a recipe from my dear friend Anastassopoulos Panagiotis publisher, writer and painter. He’s a man who loved Andros and especially Korthi. His love led him to write a book about the island '' My Andros. Sources and Sounds in Korthi”. 'My inspiration,’ as he says, ‘comes in particular from Andros, and when I talk about Andros I mean Korthi. This is not the place I was born. Life brought me to this place, which I fell in love with. So trying to get to know it better, I started wandering, every now and then: next to a church, a fountain, after a bridge, a stream. There were effortlessly tastefully built fountains, with beautifully engraved inscriptions that concealed many secrets." After two years of hiking in the sun and rain, miles of mountains and hills, after countless discussions with locals, he was able to record 60 sources on the island that others may well not have known. With this book it leaves a legacy to future generations.

That's how he left this particular recipe to me. When I asked him to give me a recipe for the page (since cooking is another weakness) he told me, “I'll give you the traditional Fourtalia recipe as they make it in Andros.” But he didn't just give me that. The text below is his and I thank him very much for everything.
I hope to see Panagiotis again soon!
‘FOURTALIA’ FROM AUNT MARIA
On the fifteenth of August in Gialos, even when it’s not windy, you cannot stand anywhere unless you are submerged in the sea.
That Wednesday I had no appetite for running to Agia for a swim. “Strange people, strange ways,” as my mother, Mrs. Contilo, would say. I decided to go to Laka at noon to see Uncle John and Uncle Maria. I hadn’t seen them for a long time. I didn't have much courage by that time being only a young man!
I took the road by the Kapparian River, of course on foot. In the beginning the lush vegetation and reeds protected me from the sun, but as I stepped out, the heat of the sun hit me. I took off the t-shirt I was wearing, dipped it in the little water of a puddle, tied it to my head like a sari, and continued to cut through with patience, stroking the rich vegetation right and left.
Half an hour later, I must have been crazy, but I arrived. I stepped back on the trail, put on my clothes again and set off for their home, imposing on Kampos, which was awash in green.
I estimated the place to be about at least two hundred years old, with the signs of the years manifesting on the outer walls, but rightly proud in its grandeur, with its stone arches, the large oven in the yard, the water-filled pond, the press, the tame horse, tied to a cypress tree, dozens of hens scattered, a beautiful cat on the ladder welcoming me before Uncle John heard my arrival.
The stone steps led me to the high-ceilinged kitchen, my uncle jumped up like a spring, his eyes suddenly glowing – as they always flashed every time he met me throughout my life - I went into the cool interior. Aunt Maria hastily wiped her hands on her apron and kissed me sweetly.
My uncle pulled out a chair to sit on at the middle table and went to the cupboard to get two glasses and a small bottle of raki. He sat down and served and we drank to our health. My aunt turned around embarrassed, looking a little nervous until she opened her mouth: "So, you must eat something my dear Yannis, but I have nothing to offer you! Shall I put an omelette in the oven?”
I nodded affirmatively and my aunt set about preparing. I was wondering what was it that I heard, what food was being made for me? On the second raki I asked uncle about the dish that my aunt was fixing. He told me that it was made from pork fat, gluten, sausages and their own smoked meat.
My aunt was at the sink peeling potatoes. She took down a large frying pan but her back was to me and all I saw were some snippets of action at the start. The conversation turned to slaughtering pigs (!) and without even realizing how long we’d been talking, Aunt Maria set down a platter on the table. There before me was a golden-yellow omelette with sausages and potatoes which smelled delicious. (Through the years I’ve learned that a successful ‘Fourtalia’ has exactly that smell!)
The mint, maybe the marjoram too, rushed to my nostrils and hammered them. Mechanically I stretched out my hand and cut a piece with the knife, I brought it to my mouth.
It was manic! There were a myriad of flavors which washed over my palate: smoked meat, mint, anise, fennel, orange; they came at me one by one all together at the same time! Years have passed, but for me this dish will always remind me of my Aunt Maria!
Aunt, will you make this again for me this year?

Method:
Put sausages and dill in the frying pan. Cut the potatoes into thin circular slices and after removing the sausages from the frying pan when they are cooked, reduce the heat slightly and fry the potatoes until they are soft. Beat eggs in a bowl and add salt, pepper and mint. Pour the oil away from the pan gently, return the sausages with the potatoes and let the mixture cook. Once cooked on the one side, with a suitable flat pan lid or large plate, turn the omelette and cook from the other side.
It is served hot but it is just as nice and cold. 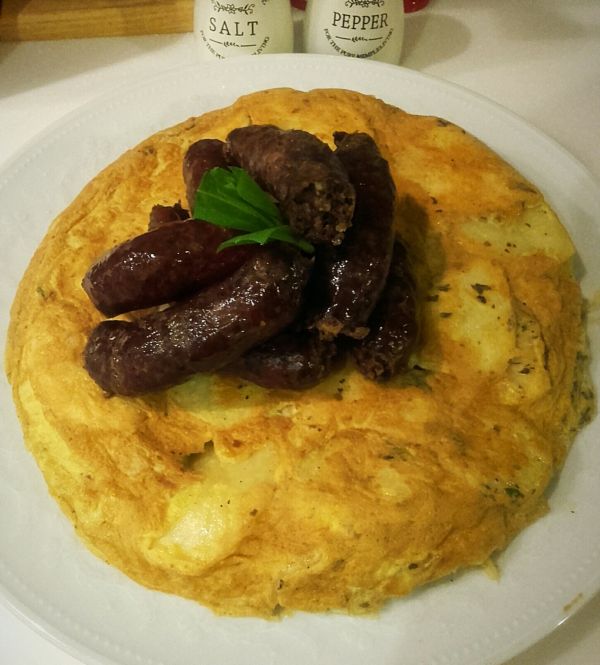